Founding Scott County
The territory of Minnesota was organized by an Act of Congress passed on March 3, 1849. By this Act, the inhabitants of the new territory were accorded the same rights and privileges that had previously been given to the residents of the Territory of Wisconsin. The State Constitution was adopted on October 13, 1857, but Minnesota was not admitted to the Union as a State until May 11, 1858. Scott County was established and organized by an Act passed in the legislature on March 5, 1853. 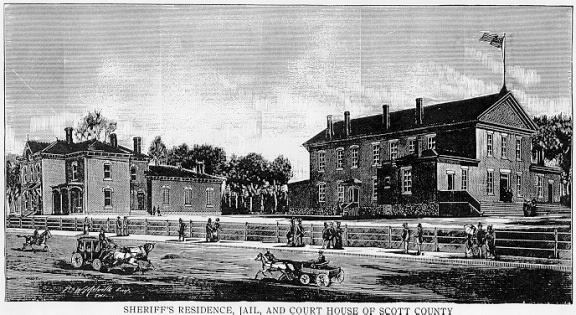 Scott County, with an area of 375 square miles, is located southeast of the central part of Minnesota, bordering on the southeast bank of the Minnesota River. 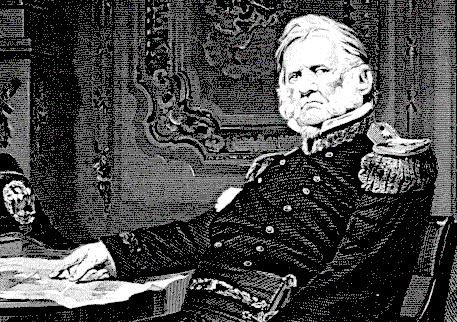 It was named for General Winfield Scott, officer of the War of 1812, Commander of the United States Army during the Mexican War, an unsuccessful Whig candidate for the presidency in 1852. General Scott never visited the area, which was to be named for him, but in 1824 he was only a few miles away when he made an official inspection of Fort Snelling.

For many generations, the present site of Shakopee, (the county seat), was the site of a Sioux village which was ruled by a hereditary line of chiefs, bearing the name of Shakpay or Shakopee (six). The first of these chiefs which we have mentioned, was Le Demi Douzen (the half dozen), who attended the conference with Zebulon M. Pike at the mouth of the Minnesota in 1805. At the time of the arrival of the first settlers, the Shakopee village, Tintonwan, Tintaton, or Teen-tah-o-ton (the village on the prairie), numbered about eight hundred people.

The first was probably Pierre Charles Le Sueur, a Canadian-born Frenchman. Le Sueur was at Fort Street Antoine, on the east shore of Lake Pepin, with Perrot in 1689, and was one of the witnesses to the proclamation claiming the entire upper Mississippi valley in the name of the King of France.

Traders and missionaries located at or near the village of Chief Shakopee at early dates. Oliver Faribault is said to have located on the site as a trader in 1844. His father, Jean Baptiste Faribault, for whom a Minnesota county is named, had a post at Little Rapids above Carver as early as 1803. Hazen Mooers was engaged as a trader in the Shakopee vicinity in the late forties. His son John was appointed government farmer to the Indians here. The Reverend Samuel W Pond, who with his brother Gideon II, came to Minnesota as a missionary in 1834, settled at Shakopee in 1847. His home was the first frame building in the valley. Thomas A. Holmes, a well known townsite promoter, opened a trading store on the site of Shakopee in 1851 and he is credited with being the actual founder of the city. With him came John McKenzie and Emerson Shumway to help build the cabin. Assistance was also given by Daniel Apgar who arrived before it was completed. These men were soon joined by John C. Sommerville, Arnold Graffenstatt, and R. Lewis.

Not long after Holmes arrived, David Faribault attempted to start a rival settlement about a mile and a half further east. A few French and mixed blood families gathered about him and built a few cabins, but the effort was short lived.
Beginning in 1854, the influx of settlement increased rapidly. Many of the early settlers, as may be seen by their characteristic Yankee names, were typical Americans from the older states. Later the Germans, Irish, Bohemians, and Scandinavian immigration was to be an important factor in the progress of the county.

An excursion party from Fort Snelling went up the Minnesota by steamboat to Shakopee's village in June 1842, and in 1850 three boats carried excursions upstream and "demonstrated the navigability of the Minnesota River". By 1854, the number of steamboat arrivals and departures at St. Paul from the Minnesota River, reached the hundred mark. Almost four times that number were recorded in 1858. The greater part of southern Minnesota was opened to settlement by treaties with the Sioux Indian signed at Mendota and at Traverse des Sioux (near Street Peter), in 1851 and proclaimed by President Millard Fillmore in 1853.

The Indians were moved to a reservation on the upper river. Many of them continued to return to their old hunting grounds during the summer months. About 150 members of Shakopee's band were camped near the village that bears his name in May 1858 when they were attacked by hostile Chippewa. A bloody battle followed, and the Chippewa finally retreated, leaving for their homes to the north. This was the last of a long series of conflicts between the two great Indian tribes of Minnesota.

The area of Scott County was not involved in the Great Sioux Outbreak of 1862. One of the leaders of the Indians was Little Six, who had become chief of the band in 1860. This chief and Medicine Bottle, were captured by John McKenzie, and hanged at Fort Snelling in 1863 for the murder of Philander Prescott during the outbreak.

Scott County was established by an act of the legislature on March 5, 1853. The boundaries coincided roughly with the present boundaries, but included a considerable area to the south. On February 20, 1855, the area was greatly reduced. Until 1871, there was a dispute between the boundary line of Scott and Dakota counties.

The first officers appointed by Governor Alexander Ramsey in 1853 were: commissioners - Thomas S Turner (Chairman), Franklin Wasson, and Comfort Barnes; sheriff - Ai G. Apgar; justice of the peace - Daniel Apgar. At the first meeting, (held on April 29, 1853, in a stone building), the county board named Daniel Apgar the judge of probate, and William H. Nobles as the county surveyor. It also made Scott County one election precinct and ordered that an election be held at the home of Franklin Wasson in Shakopee. This election was held on the second Tuesday of October 1853.

The system of county government in Minnesota was reorganized by the township act passed by the legislature in 1858. The Scott County commissioners met on April 5 to establish twelve townships. The twelve chairmen of these townships were to constitute a board of county supervisors, whose first meeting was July 5, 1858. The supervisor system proved cumbersome and the commissioner system was resumed in 1860.

The county seat was established in Shakopee in 1854, and block 56 was donated by D.L. Fuller and Thomas Holmes to be used for public buildings. The county seat has since remained at Shakopee, although several attempts have been made to remove it to Jordan or Lydia.

A stage line was established between St. Paul and Shakopee in 1853, and a ferry across the river at Shakopee opened the same year. H. A. Holmes was appointed postmaster at Shakopee on December 10, 1854, but the office was not opened until a month later. The Shakopee Independent was established in 1854. The first petition for a school district was granted by the county commissioners on July 2, 1855; the first sale of tax delinquent real estate was in April 1858; and the first license for an auctioneer was issued by the board on May 12, 1862. The first churches in the county were in Shakopee: the Methodist Episcopal, organized in 1853; St. Peter's Episcopal and St. Mark's Catholic, organized in 1854; the Presbyterian by the Rev. Samuel W Pond in 1855; and St. John's Evangelical Lutheran in 1859.

In August 1862, the county commissioners of Scott County appropriated $10,000 as a fund to encourage enlistment in the United States Volunteer Army.

The river and the trails (which gradually emerged as highways), were the only routes of transportation for nearly two decades after the real settlement of the county began. A railroad through the county was projected as early as March 2, 1855, when a charter was granted to the Root River Valley and Southern Minnesota Railroad Company. One of its routes was from the Twin Cities to Shakopee, up the valley, crossing the Minnesota River at Street Peter, on to Mankato and then to the Iowa line. The name was changed to the Southern Minnesota Railroad in 1857. Nearly forty miles had been graded up the valley from Mendota when the financial panic of 1857 put an end to further construction.

The Minnesota Valley Railroad on March 4, 1864, succeeded the Southern Minnesota, and started work on the old road bed. The construction train, drawn by old number 1 engine (the "Mankato"), reached Shakopee on November 11, 1865. Regular traffic was opened between that town and Mendota five days later. In 1869 the name was changed to the St. Paul and Sioux City Railroad Company. That year a bridge was built across the Mississippi near Mendota. Le Mars, Iowa was reached in 1871, where connection was made with the Iowa Falls and Sioux City railroad at Sioux City. The line is now a part of the Chicago, St. Paul, Minneapolis, and Omaha system.

The first railroad shops for the Minnesota Valley Company were opened at Shakopee in 1867. They were destroyed by fire in 1872, entailing a loss of $100,000, but were at once rebuilt. The machine shops were removed to St. Paul in 1882. A new car shop was erected that year, but was discontinued in 1883. The machinery and some of the men were transferred to Hudson, Wisconsin.

In 1871, the Hastings and Dakota, (now a part of the Chicago, Milwaukee, St. Paul, and Pacific Railroad), was put through the county forming a junction with the Omaha at Shakopee. With a change at the eastern terminus, this road followed a route not differing greatly from that surveyed for the Mininger, St. Peter, and Western Railroad in 1857. The population of Scott County increased from 4,595 in 1860, to 14,116 in 1930. The people were predominately native born. The foreign born population in 1930 numbered 1,230 and included 579 Germans, 286 Czechoslovakians, 95 Norwegians, 44 Swedes, 34 Irishmen, 32 Canadians, 26 Danes, 22 Russians, 21 Austrians, 12 Hollanders, 12 British, 12 Swiss, 10 Poles, and 44 of other nationalities.

Scott County was almost exclusively agricultural. The early settlers first raised food for their own families and fodder for their stock with a little surplus to sell or barter for such food, staples, clothing, and supplies as they could not produce. Soon wheat was the principal crop, although the acreage of corn and potatoes increased and there was a growing interest in dairy cattle, oxen, and swine. In 1879, Scott County led the state in the production of flax. About that time, coincident with a diminishing yield per acre of wheat, attention was turned more and more to diversified farming, a trend which was particularly marked after the introduction of cooperative creameries in the nineties.

In 1934, the principal field crops were corn and oats, but enough winter wheat was raised to give the county third place in the state in acreage of that cereal. Major attention is paid to cattle and swine raising, and dairying. For a period the sugar beet crop was important but the acreage has gradually declined.

The principal industrial establishments in the county in 1930, were flour mills, breweries, creameries, print shops, a wagon shop, a bottling works, a foundry and range factory, a lime kiln, and a brickyard.

As of the 2000 Census, Scott County contains a population of 89,498 within 365 square miles. It is located 25 miles southwest of Minneapolis and is part of the seven-county metropolitan area.
Notify Me®
Pay Property Tax
Report a Concern
Delivering What Matters
Get Involved
Maps
Contact Us
Facebook
Twitter
YouTube
LinkedIn
[]